The first app is one of my favorites. It’s actually made by Google and it is called Snapseed and it’s a really great photo editing app that has a bunch of really cool features and has a pretty nice interface. 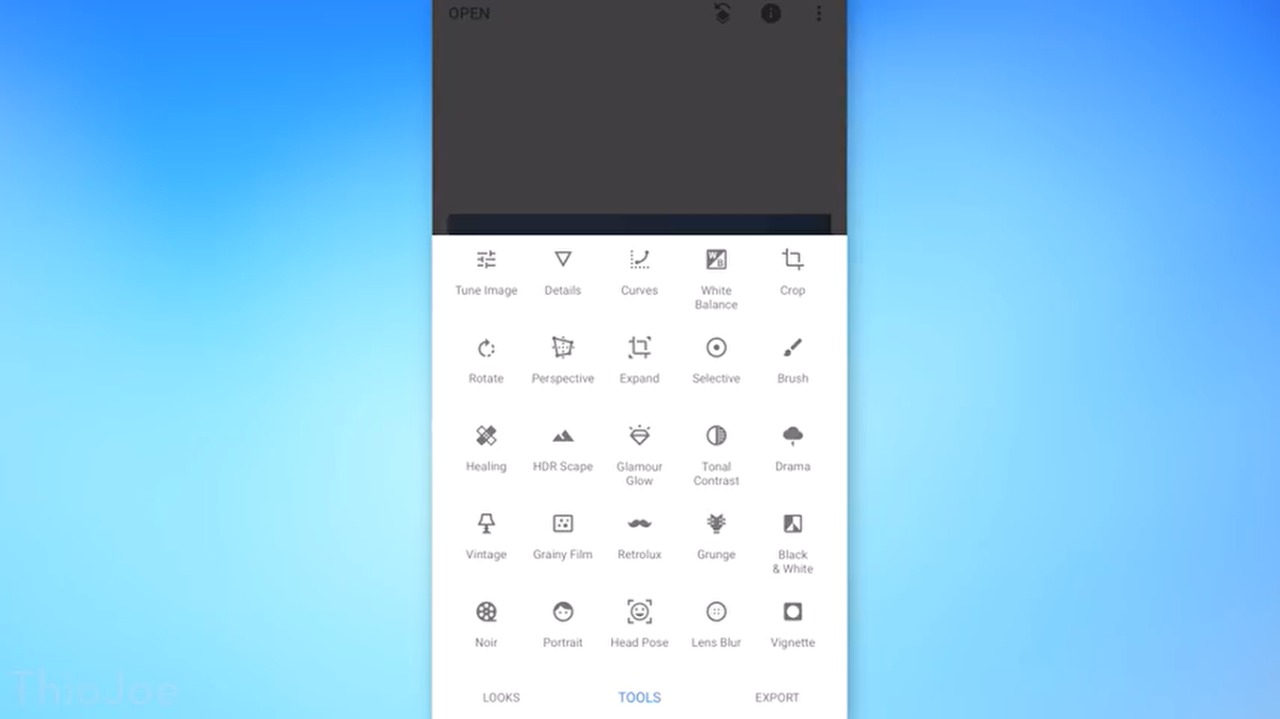 So for example, one of the unique effects that I noticed they have that not really anything else has is called Ambience which just kind of lowers or raises the brightness and pop of the image overall in a way that is different than just raising the brightness or raising the contrast. It’s hard to describe but you’ll notice how it works and I seem to like it and this of course is an addition to all the regular adjustments you can make like brightness contrast saturation all that there’s a

The different tools you can use you slide up the drawer. You can see all the stuff you can do including filters plus a bunch of different adjustments such as physical adjustments like perspective where you can kind of warp the image maybe if it is at a weird angle or something, you can adjust it that way and fix it. So there’s a lot you can do with this app and it has really good quality to the next step is called VSCO, which I believe is pronounced visco and this is actually one of the first apps that had filters. I think it was even before Ram so obviously they have a lot of unique filters that you can apply to photos and more than Instagram really but also it does have a bunch of other effects to 4. 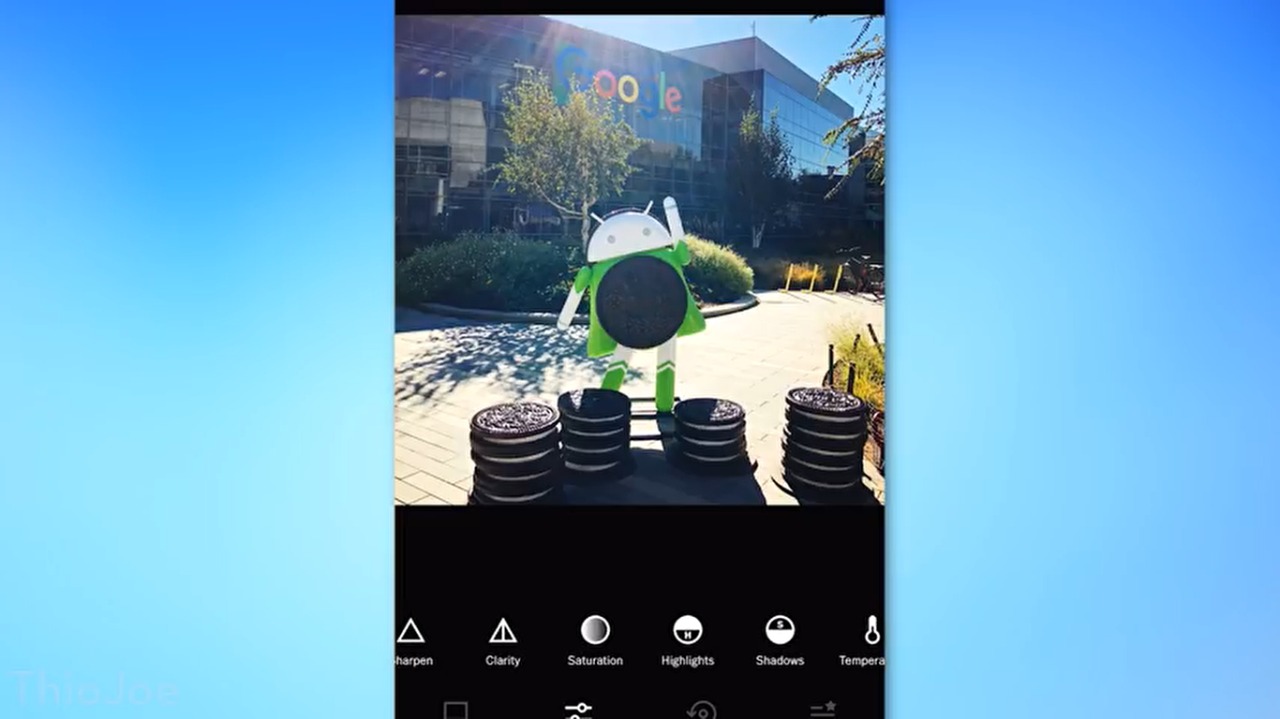 For example, it has a specific skin tone tool which can basically Target and adjust the skin tone. So if you’re pale or to bright sunlight or something, you can fix it that way and another really good example for an effect is the ability to tint the Shadows or the highlights specifically, which I really haven’t seen in many other apps if at all so if you are really specific for how you want a photo to look this could be a good way to do it in addition to those filters obviously and kind of like

Naps eat it’s going to have a lot of tools as well. It’s fully featured. So at this point you can probably use both of them and it’s more of just which you prefer in terms of the interface. All right moving on. The third app is a little bit different from the previous ones. We just talked about in that it more focuses on filters that kind of convert your photos into type of artwork. So it’s not filters that just kind of adjust the color but it applies different effects to the photos. Free 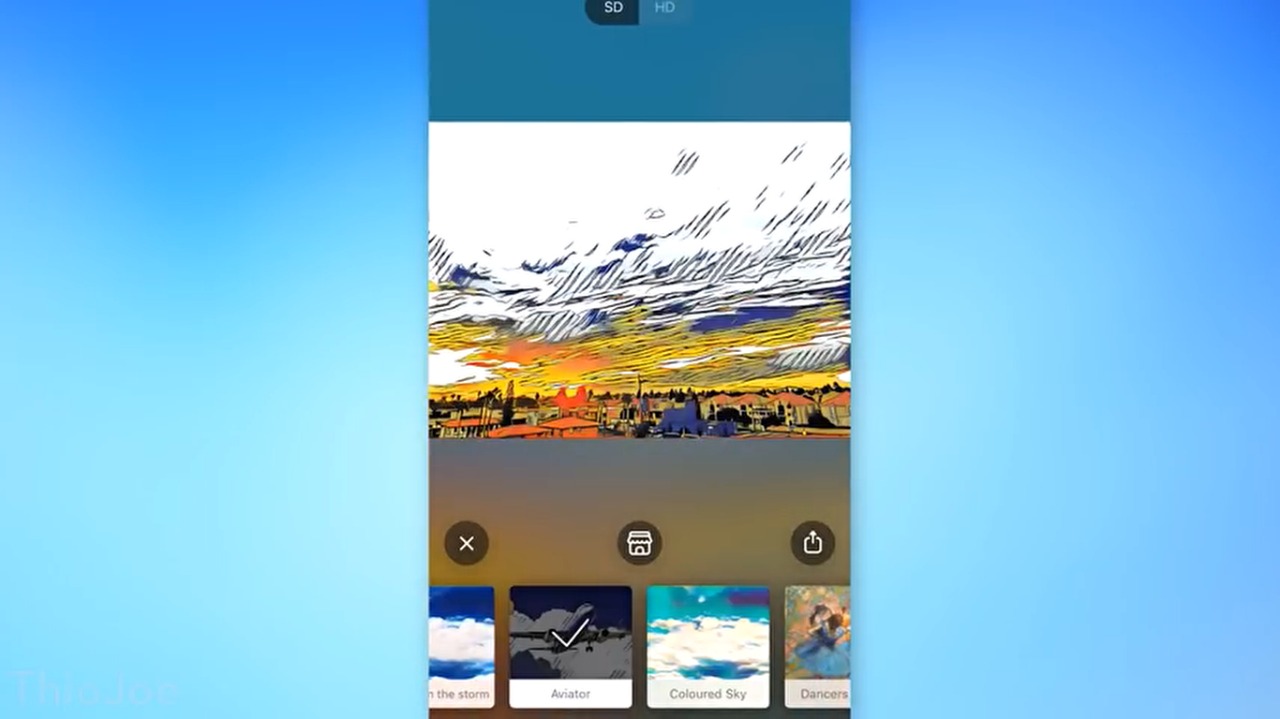 What I mean by that you can see examples here is there are effects for example making your photo look like a watercolor or an oil painting or a sketch photo or something like that. So it’s not just in terms of making the photo will colorful or something. It completely changes the way the photo looks really now a lot of these are pretty extreme. So if you use these effects on every photo it might get a little bit old, but you can adjust the degree to which these effects applied.

To the photo. So maybe if you’re posting stuff on Instagram and you want to make one little bit more artistic, you can use a little bit of one of these effects or just change it up and use it completely. So it’s definitely something that is a little bit different. You might want to check out at least have on your tool belt. Alright now, the next three apps are actually all made by Adobe and they’re all Photoshop apps, but they serve different purposes. So they are different. We’re going to go over them, but just know that when I say these they are different apps. The first of these three is called Photoshop Express and it’s kind of like the first two we talked about where you get General basic adjustments, like contrast brightness all the stuff you’d expect sharpness and stuff like that. And the interesting thing about this one though. Is that while it does have filters or looks as they’re called? 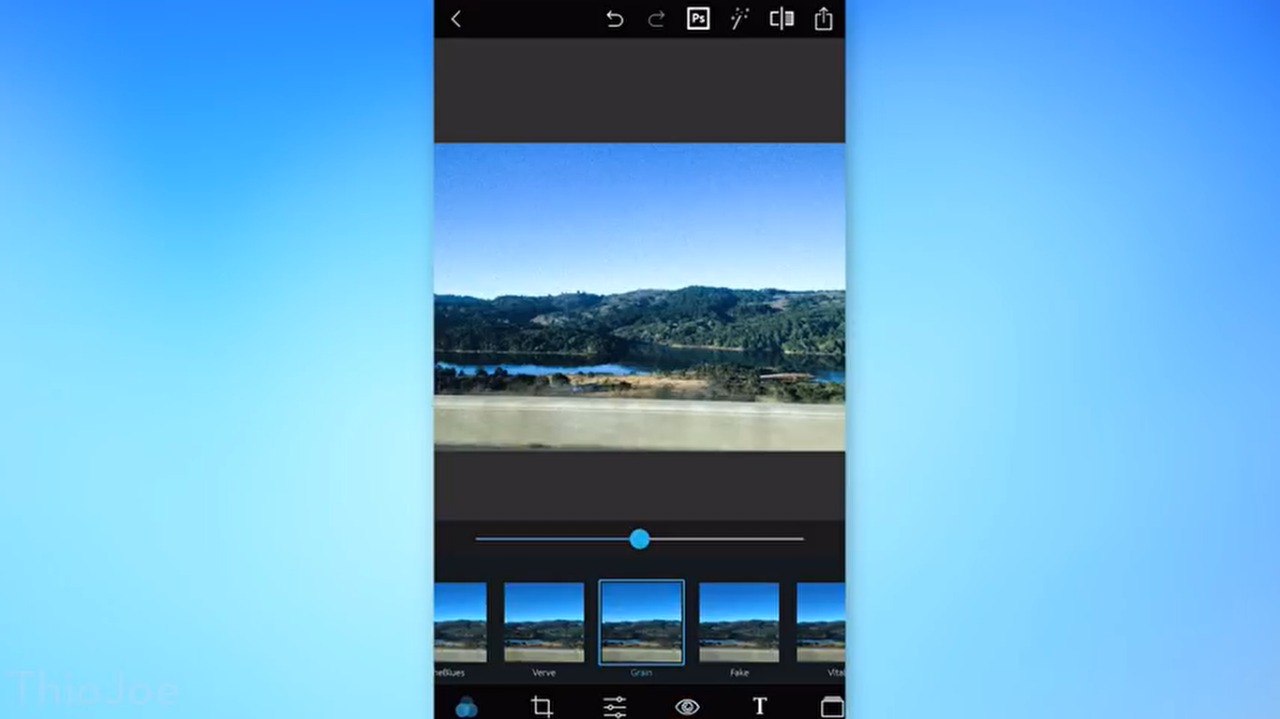 The difference with this one is you’re allowed to create your own looks and then save them for later. So if you tend to do a lot of photoshopping or editing a photos and you kind of have a general look that you like to get them to look like this is a good one where you can apply that same look and just save it and you can see here. Another cool thing is that they have the filters or looks categorized by the different types of photos. You might be taking so they have one for poor trades one for landscape. So if you’re not really sure.

Kind of filters you want to apply this might be a good one to get started. Just kind of check out whatever filters they might recommend. And obviously you don’t have to use the landscape ones on landscape photos. You can use it on whatever you want, but it’s still need to check it. Now. The next one is called Photoshop mix and this is going to be different than any of the other ones on the list and that’s because like the name makes suggest this actually allows you to combine multiple photos. So you can import different photos as layers and one of the effects you have is the ability to cut Out objects from one and keep it and insert it over top of other photos. 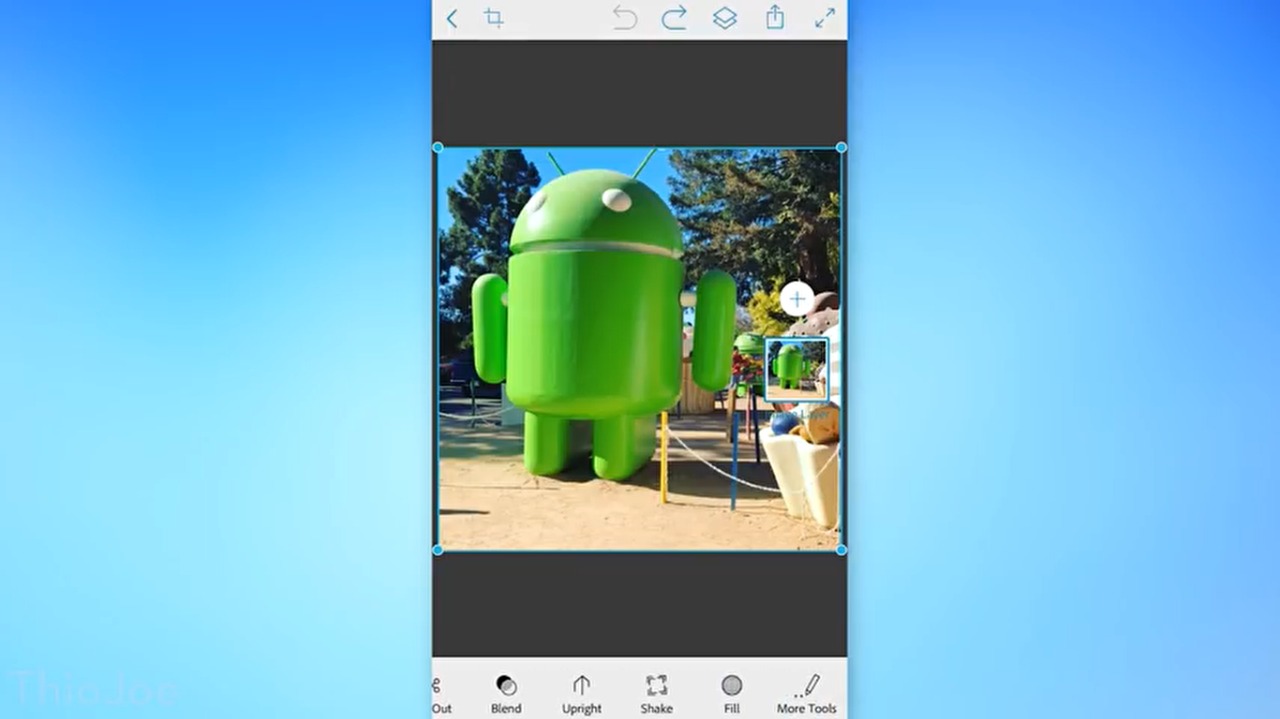 Now it doesn’t work perfectly obviously, but it is pretty much the only app that allows you to do. This and is most like the regular Photoshop app on desktop. Although obviously not nearly as powerful and what’s good about this is it’s pretty straightforward to you that makes it easy to create these layers using the different photos that you insert and edit out. We can even duplicate photos and that sort of thing and make transparent backgrounds. So this is definitely a unique one to have and of course, it’s made by Adobe. So it’s going to be

Pretty decent quality sometimes cutting out objects isn’t perfect but it’s better than nothing and there’s not going to be that many other apps that will allow you to combine photos in this way. All right. Now the third Photoshop app is called Photoshop fix and like the name suggests. It’s mostly based around fixing issues with your photo like red eye or maybe blemishes or just adjusting everything else that we talked about before the general adjustments. You’re going to get brightness contrast everything like that. Nothing to Special but the one killer feature I think which is actually kind of funny. 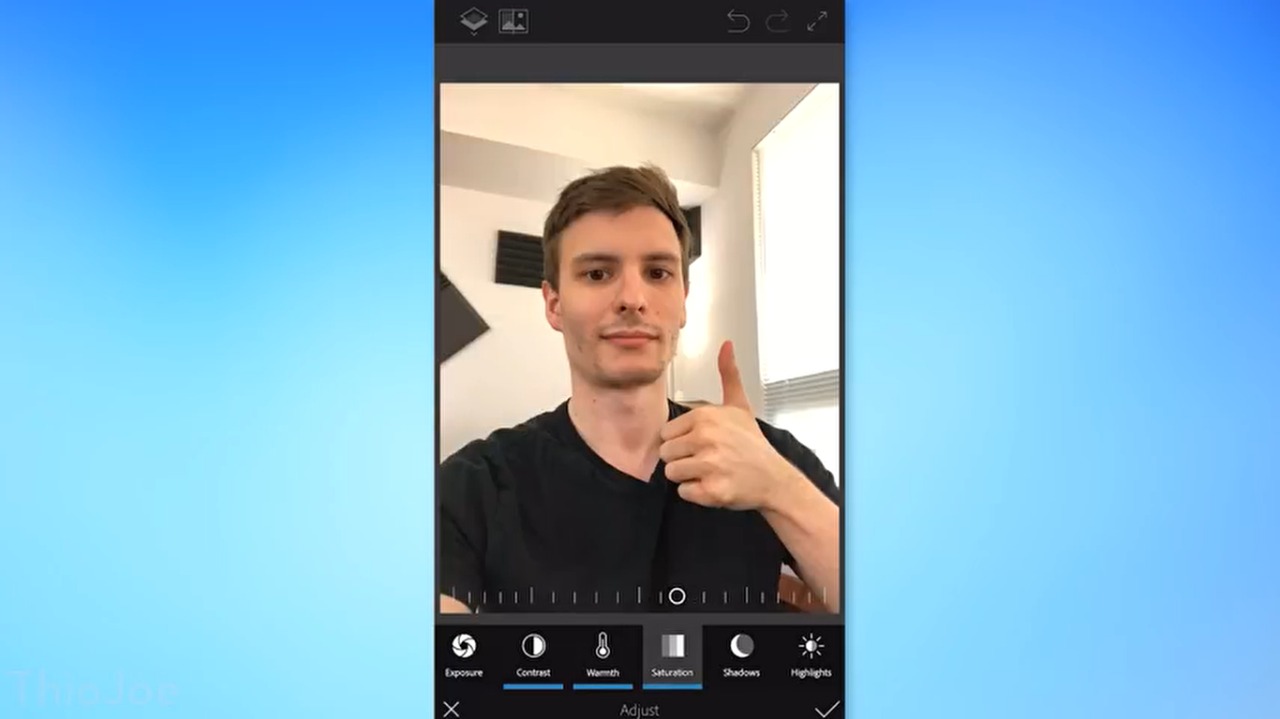 Is the selfie adjustment feature so when you take a photo of a face, it will recognize a face and then you have the option to really mess around with it. However you want it’ll identify each point on your face and different features and you can adjust them. However you want for example, if you want to make your eyes Spread Way further apart you just click on something and click liquefy and then you can move your eyes apart make them look big screw up the way your face.

Shape it’s actually a really hilarious if you just want to mess with your own selfies, or I don’t know mess with friends or something and I guess you can legitimately use it but it is pretty unique that you can actually adjust individual facial features, which even a lot of selfie fixing apps don’t really do so, this is pretty awesome. All right. So those are the Photoshop apps and now I think we’re on a number 7 and that would be Pixlr and kind of like what we talked about before with Snapseed and visco. It’s pretty similar to those and that It’s just a really good photo editor with lots of different effects and filters and it has a really good interfaces. 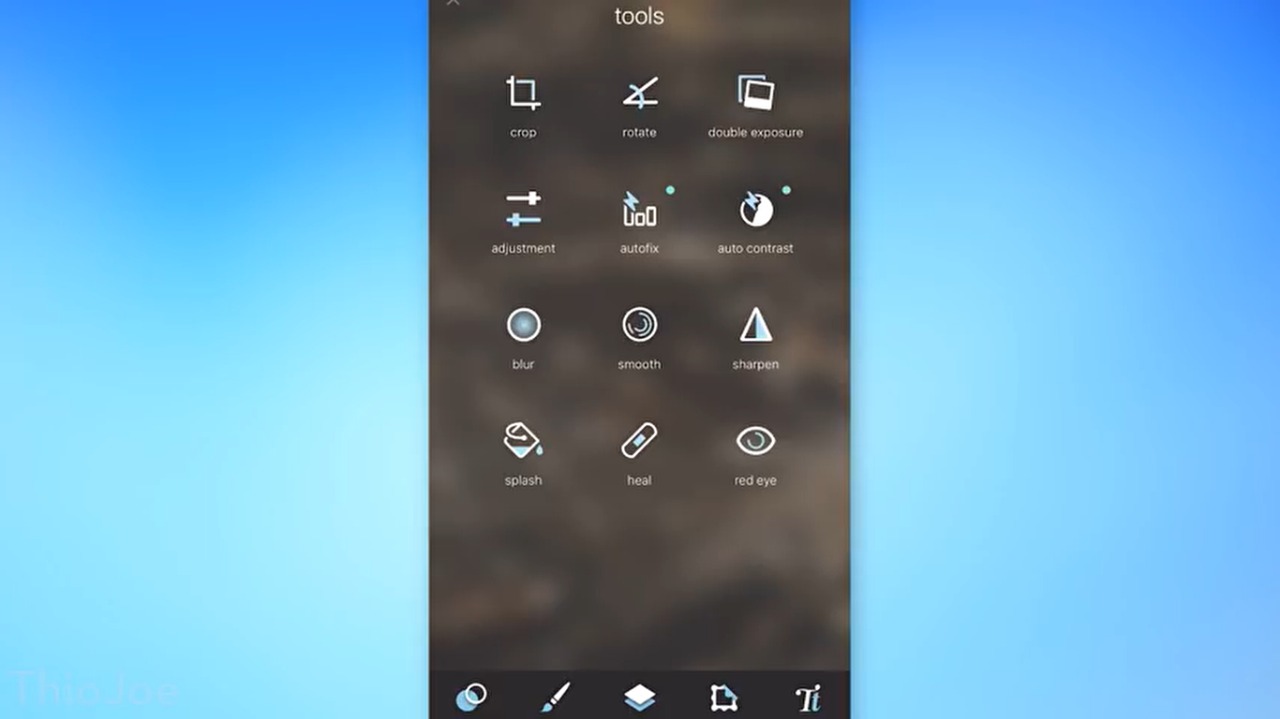 Well, so maybe you want the effects of the previous apps, but it don’t like the interface. This is another one you can check out and even if it does have most of the same other stuff that the other apps have it might still be worth having in case I don’t know you don’t like the filters on the other one and you want to check out other options. This could be a good one at least had. All right. So moving on to the next step. This one is actually not a photo editing app, but one for taking unique photos and it’s called Focus fo cos and this is actually unfortunately.

Julie only for iOS and you have to have an iPhone that has dual cameras and I’ll explain that in a second. Basically what this app does is used both of the dual cameras to figure out what is closer. And what is further away to basically make a fake book head like photo with 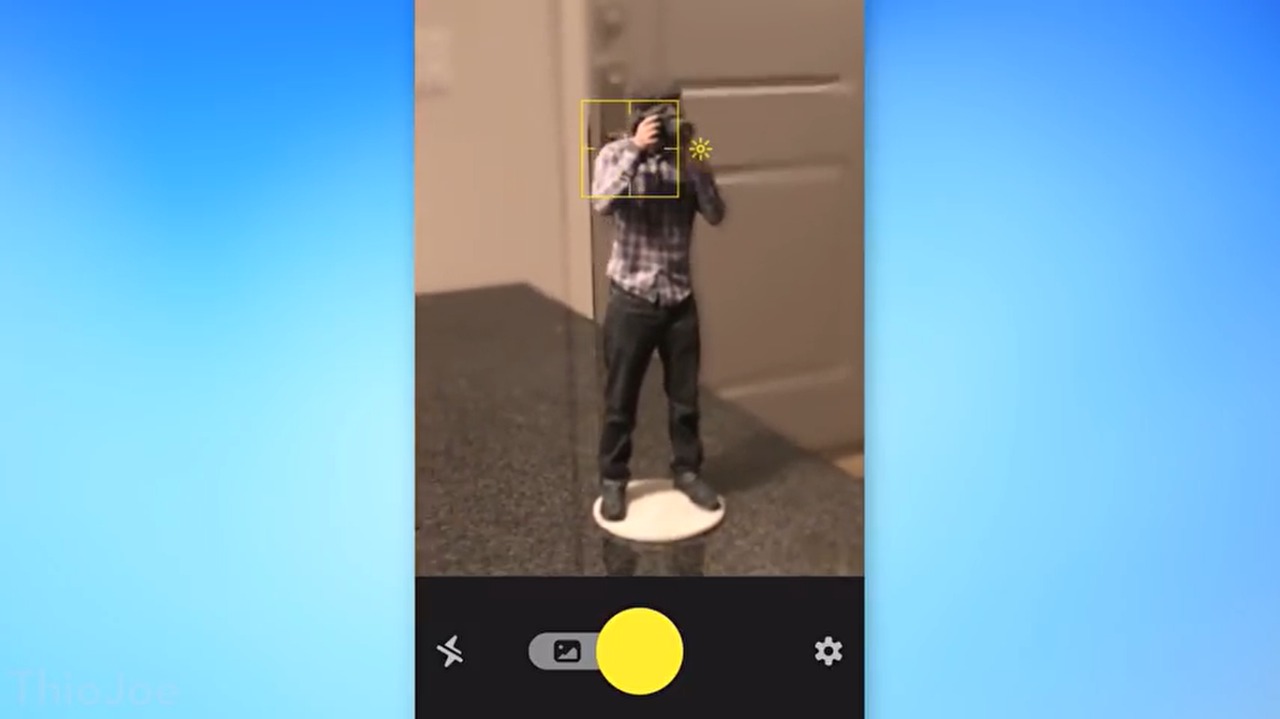 And now the portrait mode on the iPhone does this but it doesn’t always work perfectly and sometimes it doesn’t work if it’s not like a person so this will actually work on literally anything and it uses that Parallax try and figure it out. This one’s not perfect either. Sometimes it get weird edges, especially if there’s brightness issues or the background is kind of similar color, but it still is unique and I think it’s at least worth having for sure. All right now come near the end. We got a couple more number.

It’s going to be called PicsArt. This one’s a little bit different from the previous ones and that it’s a lot more cartoony. I guess it has a much different style for the filters. So you’ll have a lot of stickers that you can put on the photos and also it has a lot of distortion effects that are pretty interesting stuff. 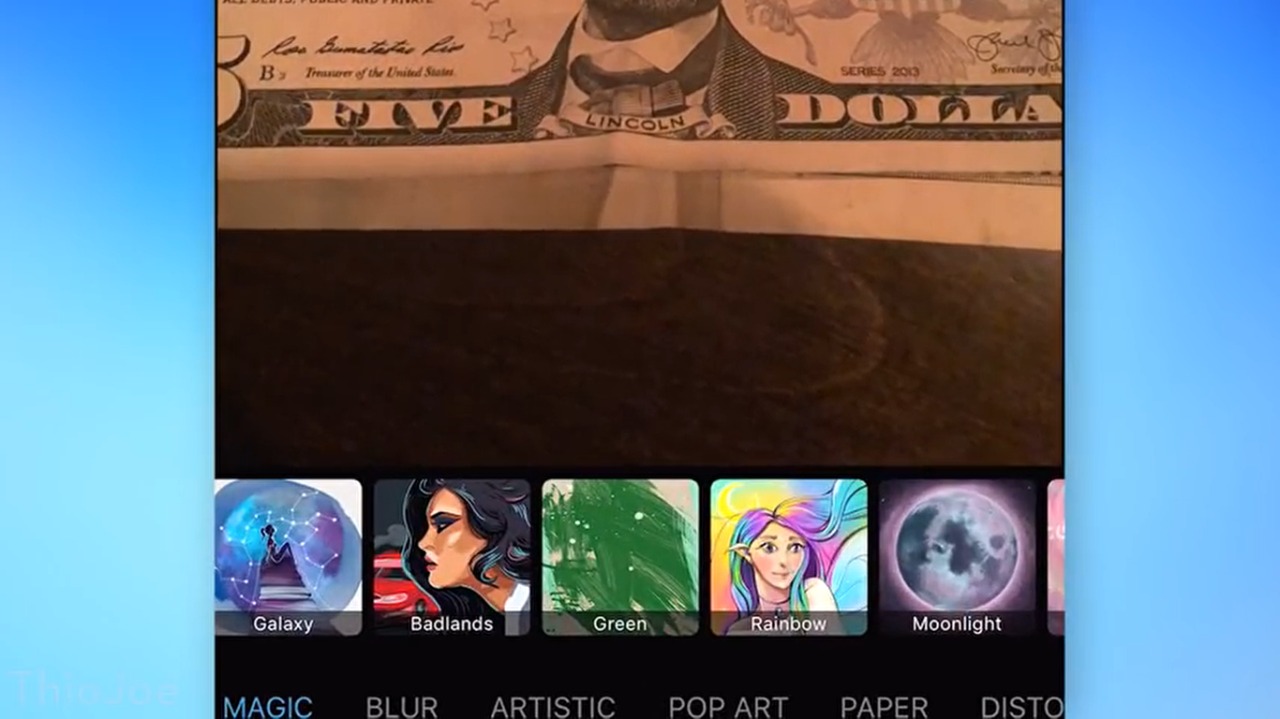 You get the classic swirl the one that will make your face look bulging and all that stuff, but there are some other cool ones that might be kind of unique and kind of like how we talked about in some of the other apps. You’re going to have some strong filter as I can. See you can say they’re not just adjusting the Hue and stuff but really change the colors completely color effects are effects like prism that apply almost like an artistic redrawing of it or something.

also if you take a lot of selfies, there’s effects that will fix your face not Degree of Photoshop decks, but just in general and the one thing you need to know is though, I think there might be a paid version but the free version has ads that pop up which are kind of annoying. I don’t think I’ve seen any other photo editing apps that literally have a whole screen ad pop up you have to wait to go away. So that’s really annoying but it seems like this app is more focused on making fun edits like with stickers and all that as opposed to like artistic phones. All right now finally number 10. I’m actually going to combine three Different one.