you can see, he’s in the park sitting in the middle of this bench. I also have another image. It’s my son Joe sitting on that same batch, but he’s on the far left-hand side of the batch. 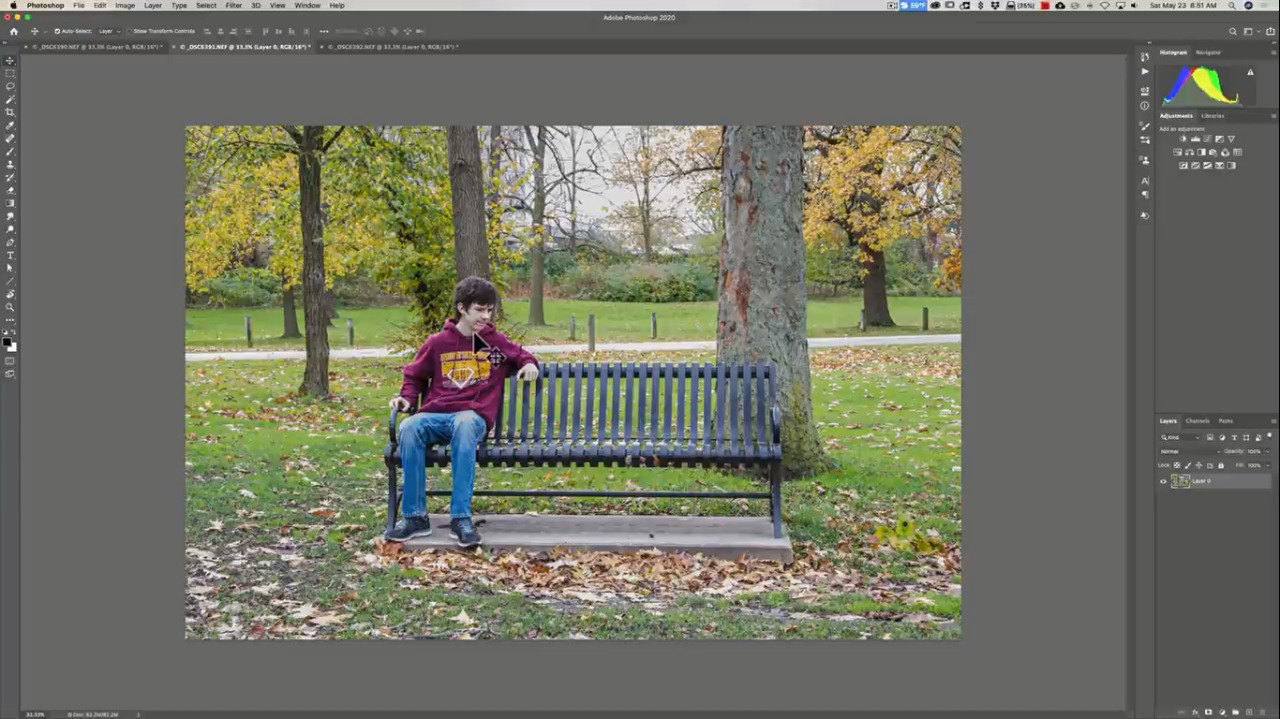 We just have single layers in both of these tabs and I want to put them together. So we’re going to have two layers in one tab. So I’m going to go to this image and I’m going to use the move to above the keyboard shortcut for the move tool is the V key B is in Victory and it’s the top tool over here in the tool. Well. 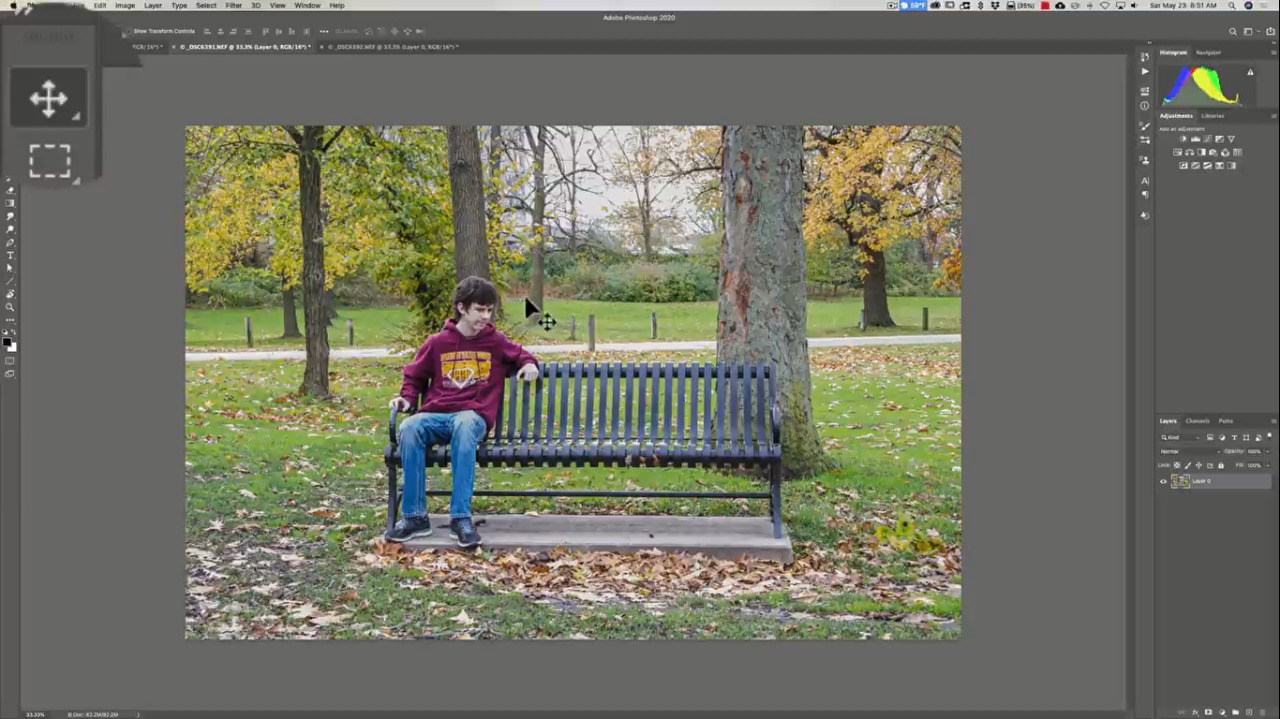 We’re just going to click on this layer. Hold the left Mouse button and drag it up to that first Tab and then hold it over that image. And I’m going to hold the shift key down while I let go of the left Mouse button that will drop it right in the middle. So it’s perfectly lined up now. You can see when I did that that layer that I just dragged over there. 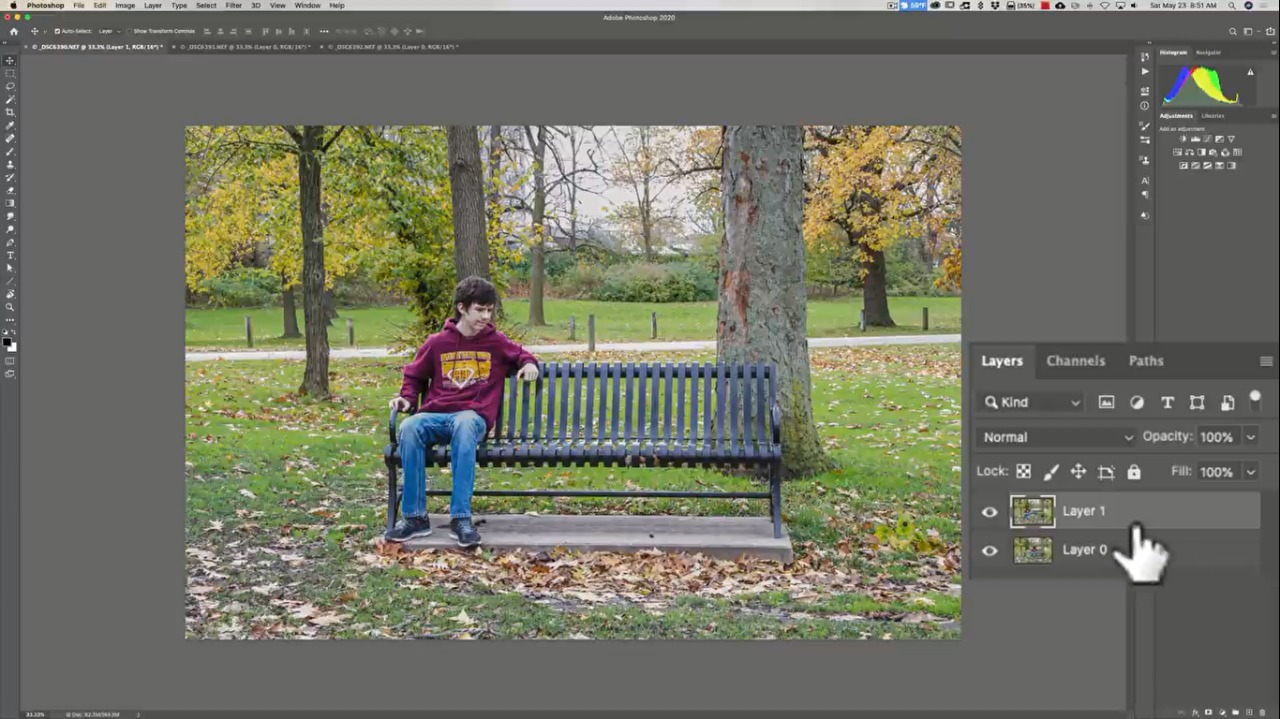 Totally obscured the layer below it if we look over in the layers panel, you can see we have that is layer one layer. One is the layer we dragged over it’s over here on the second tab. I dragged it over there and it’s totally covering up layer 0 I’ll turn layer one off and you can see that layer 0 is there now if I turn layer one back on this is where masking comes in you could use masks to have parts of other layers come through so down here.

Below the layer panel at the very bottom. You’ll see a little rectangle. But with a circle in the middle, that’s to a damask. 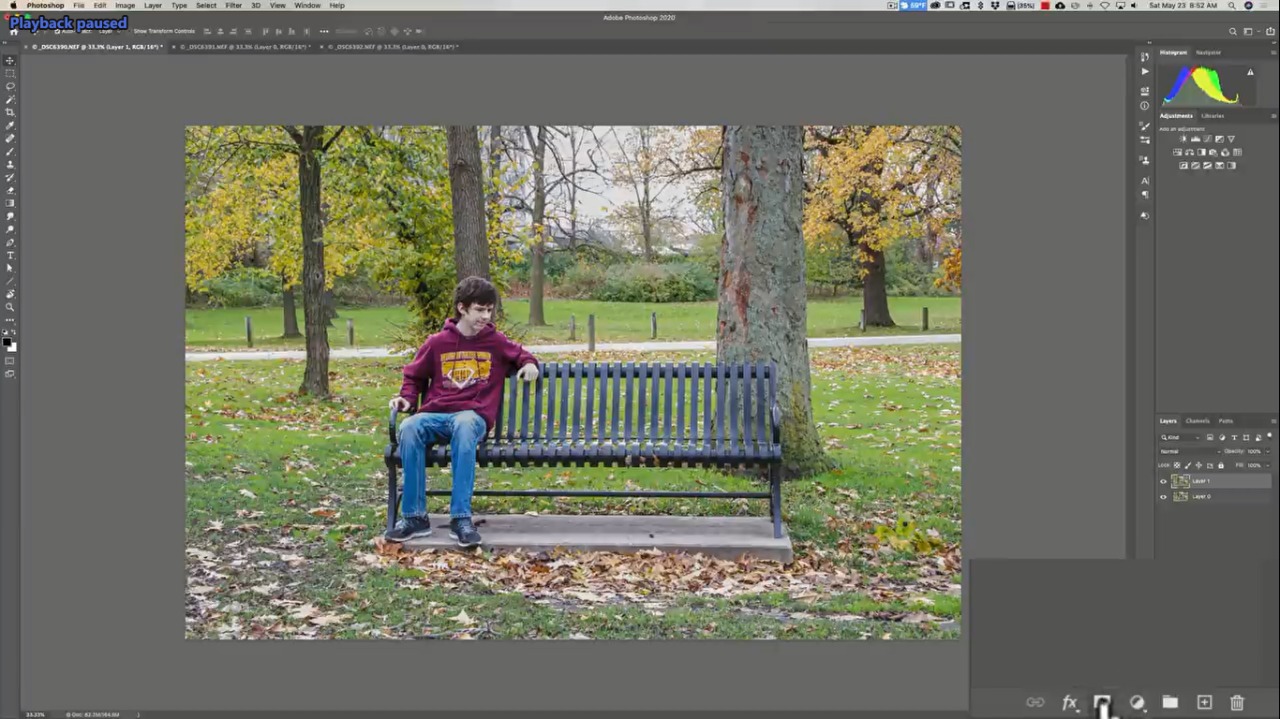 We’re going to add a mask to layer 0. I’m going to click on it and by default it will add a white mask.

We have a white mask here. Now. He white reveals what it means is it’s allowing this top layer. The layer that is associated with to be revealed. 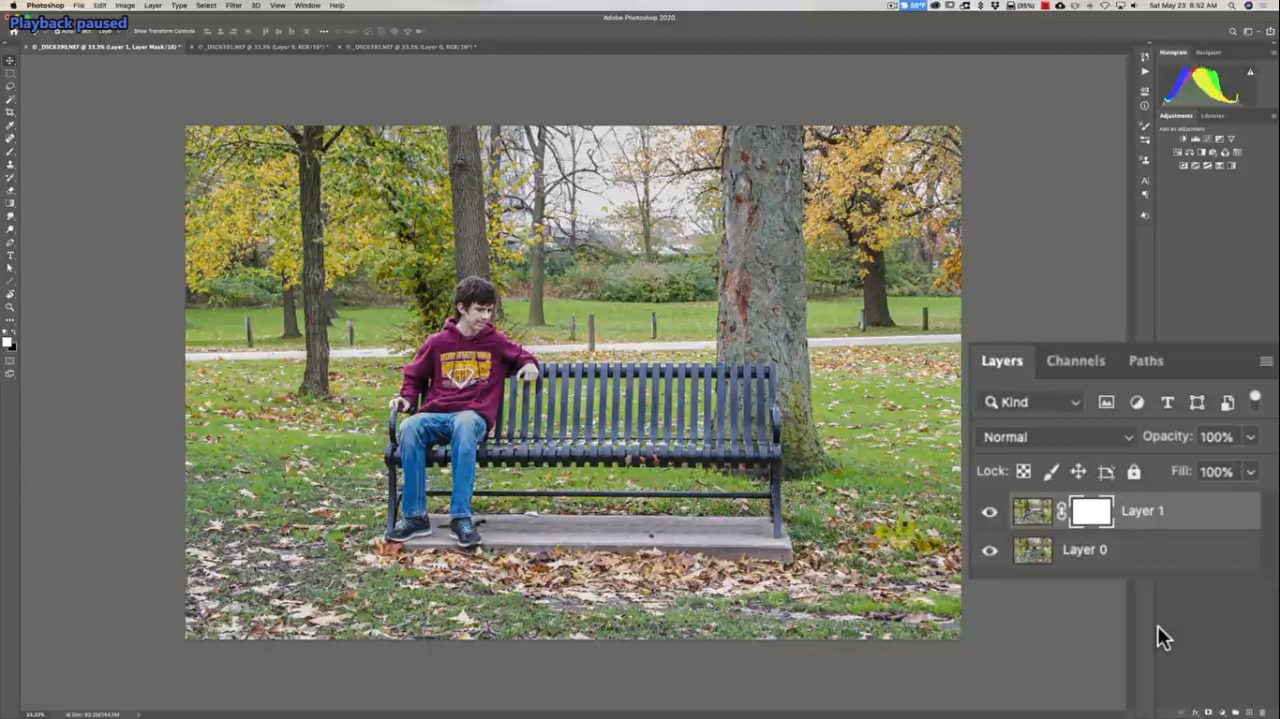 So basically it did nothing in this case. We just added the mask but nothing has changed. It’s just allowing that top layer to be revealed. I could turn off the layer and still see the layer below it but still we haven’t done anything. Now the second part of that little saying is black conceals. So that’s implying if we put black on this layer mask. It will conceal this top layer. So a quick way.

To put black onto that mask. There’s a lot of different ways to do it. We could invert it. We could go up to the menu and do things but one way is to use a keyboard shortcut that will add this. 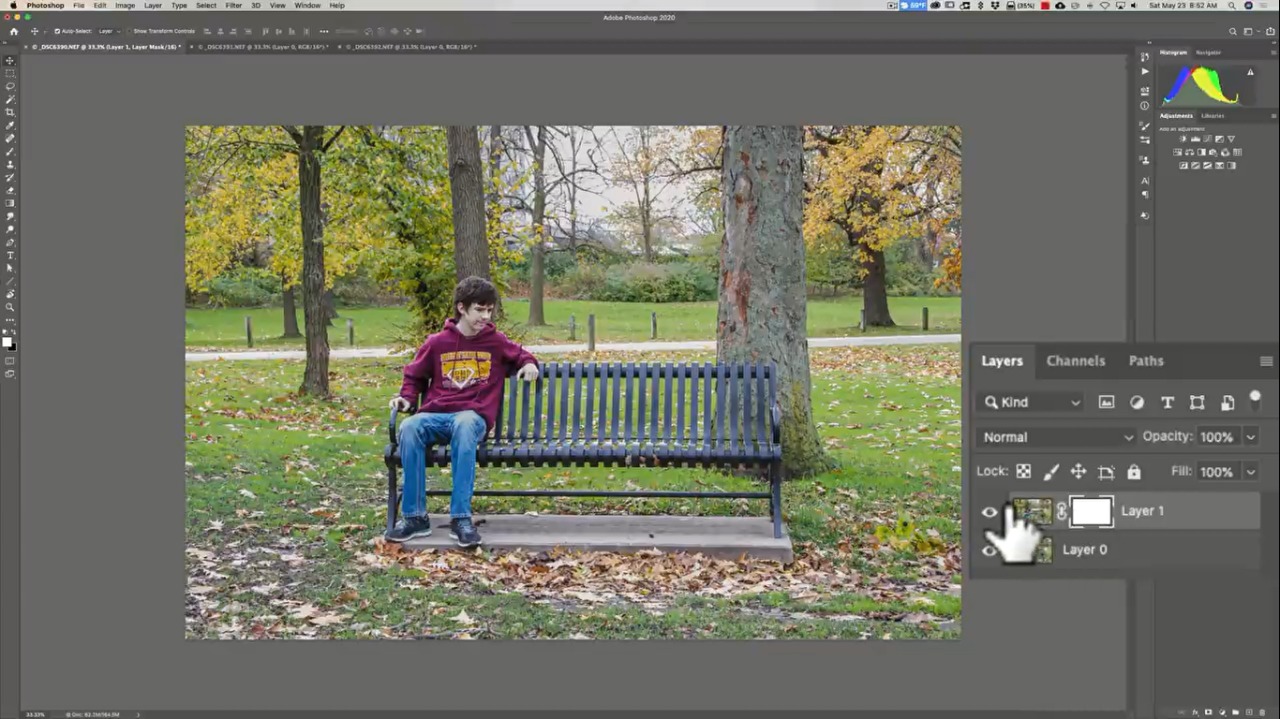 Bottom swatching see we have swatches here. The top is white. The bottom is black if I want to add that bottom color to this layer. What I could do is use the keyboard shortcut of holding in the control or command key and its control of have a PC manned if you have a Mac and hitting the delete key when I do that it fills that layer with black and you can see as soon as I did that. 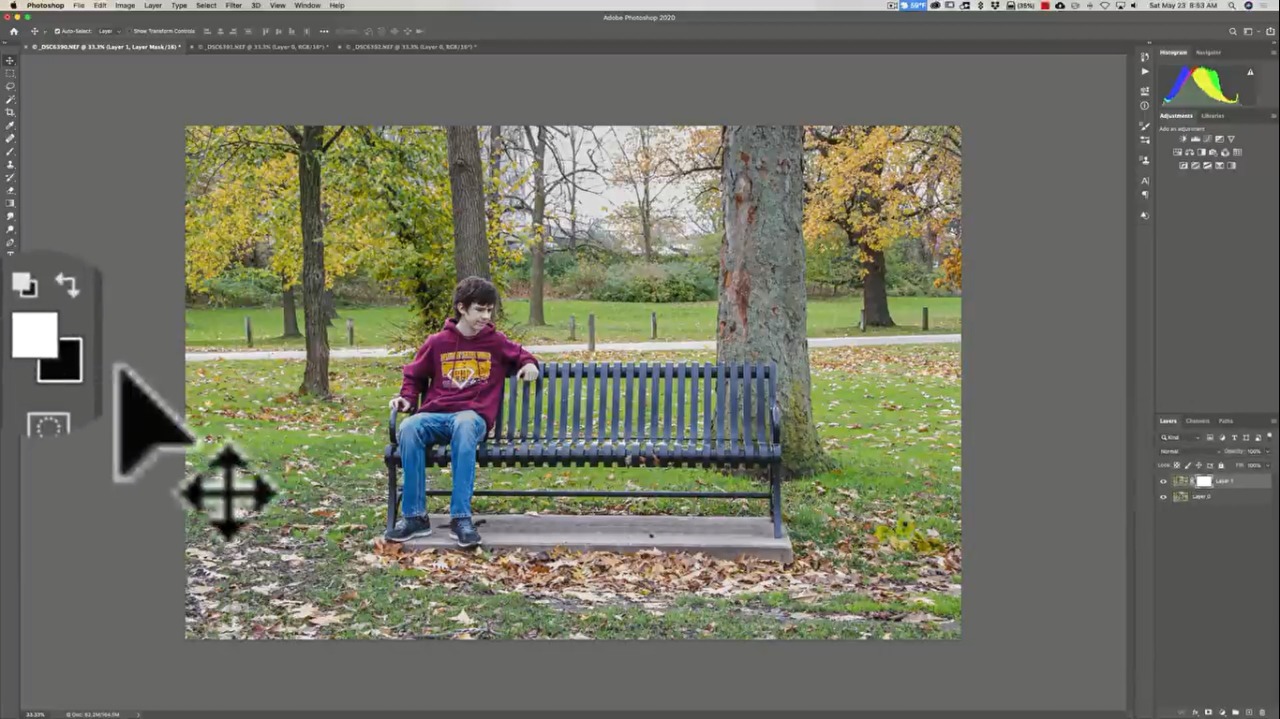 It conceals the layer that it’s associated with so now if I turn it off and on you can see nothing’s happening because it’s totally blocking out that layer allowing layer 0 to show so very basics of Mast like white reveals the black conceals. So we’re concealing that top layer. Well, there’s more to it than that. Let’s say I want to fill this with something other than what

Bland let’s go up to edit down to fill and you can see that we have a filter dialog and there’s 50% great. 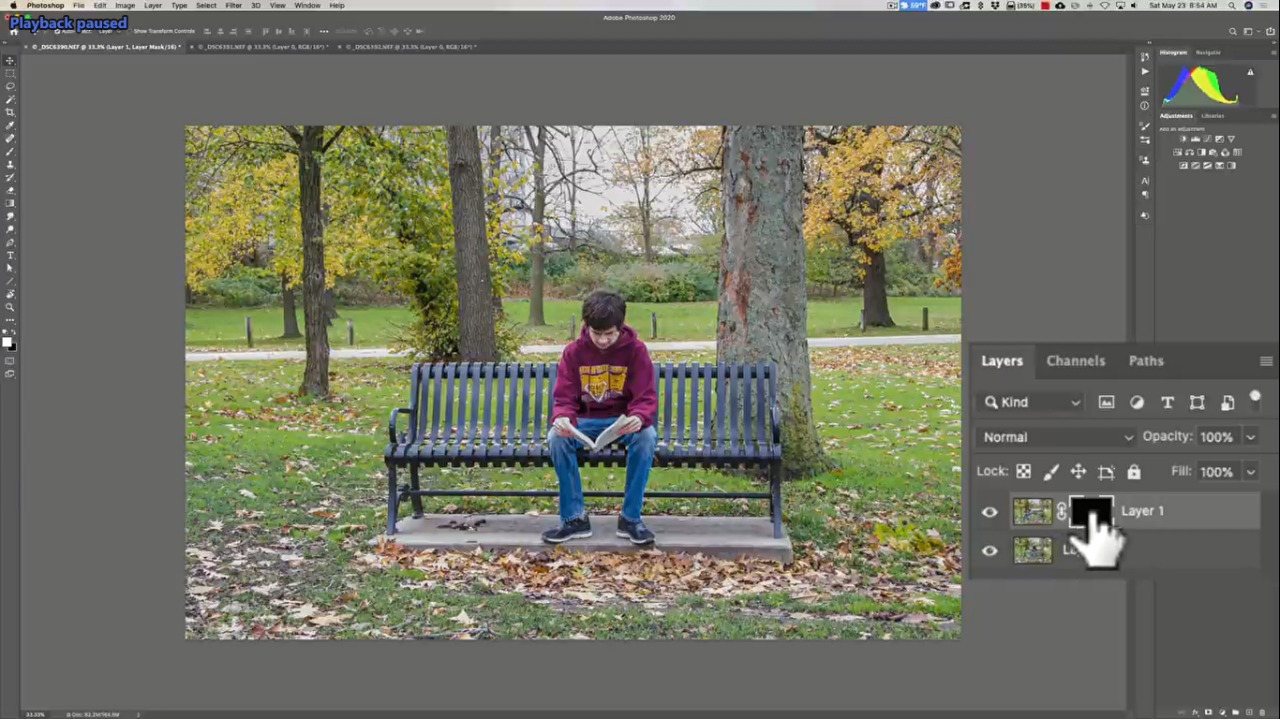 In this drop-down, let’s fill it with 50% gray and see what happens. So I’ll click. Ok. Now you can see part of one layer is coming through while the other part of the other layers show going through. 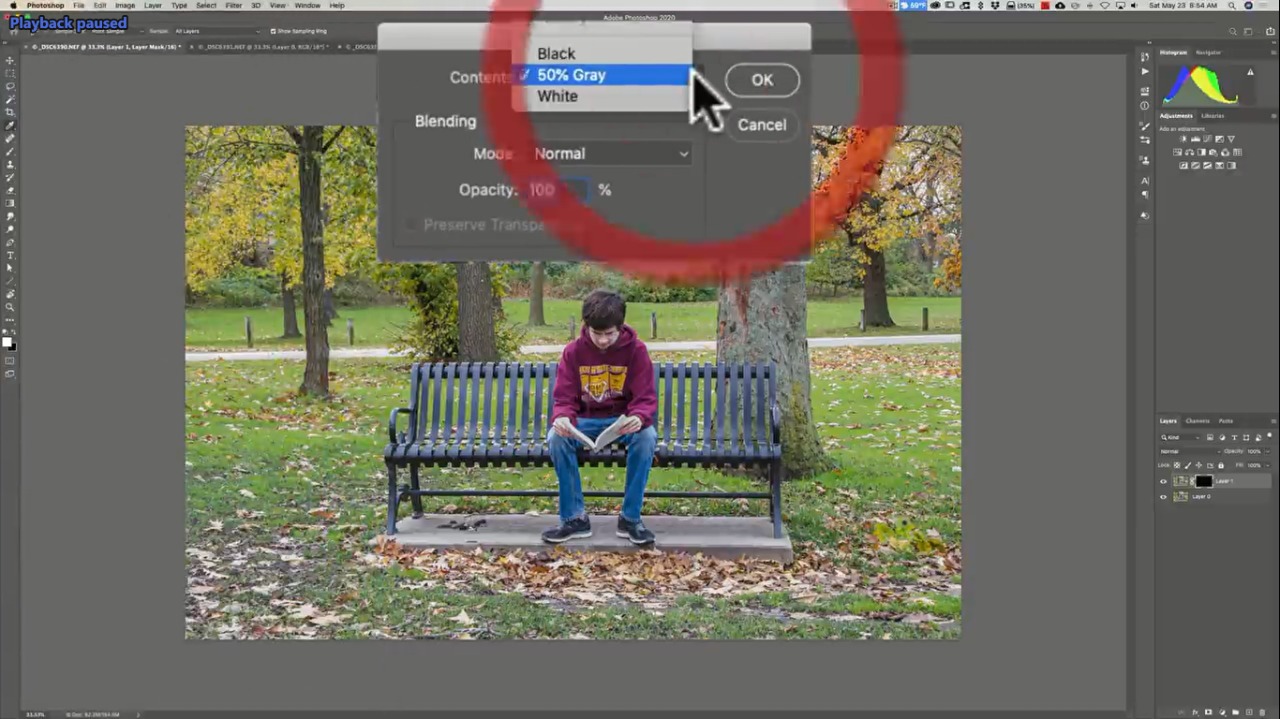 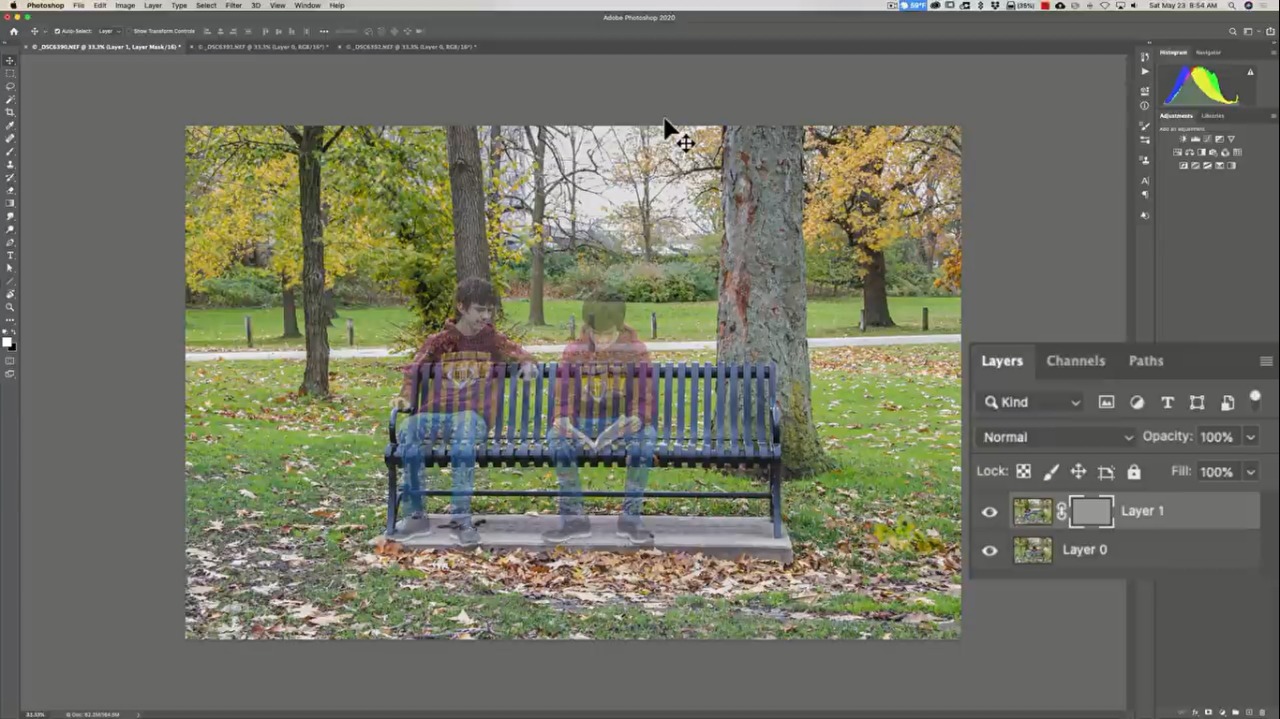 The burn tool will darken something. So every brush stroke will make something a little bit darker and now there’s three different things we could click on in the layers panel. We can click on layer 0 we could click on layer 1 or we can click on the mask for layer 1. So make sure your clicked on the mask for layer 1. I have the burn tool. So I’m going to make some of that gray a darker gray.

Using the burn tool, so I’m going to paint right here. And when I paint right there you can see I’m making that bottom layer layer 0 come in a little bit stronger. So we’ll bring in That all right now next to that burn tool in that same little cubby and the tool well over here. We have the Dodge tool the Dodge tool will make something lighter. So we’re still clicked on that layer mask that is gray with a little bit of a different shade of gray in the middle. I’m going to paint this now the Dodge tool on the left hand side now it’s making This image are part of his head at least come through a little better. Now. What exactly did we do? Let’s take a look at them mask. I’m going to hold the alt option key and that’s all that they have a PC option. If you have a Mac and click right on the mass and now it’s showing the mask so you can see we have 50% gray almost everywhere. So that’s allowing half of layer 0 to come through and half a layer 1 to show but in the middle I burned it. So it’s darker gray. It’s actually black and parts. So now that it’s black. It’s allowing all of layer 0 to show through this is the bottom layer because it’s black conceals its concealing the layer its associated with then over here. I dodged this part. So I made it lighter gray as America that made it I dodged it so much. I made it white so that reveals that reveals the layer its associated with so it’s allowing all of layer 1 One to show right where I painted and that’s why he got that effect. Now hold that alt/option key and again it click on the layer mask again, and we’re back to put we see. 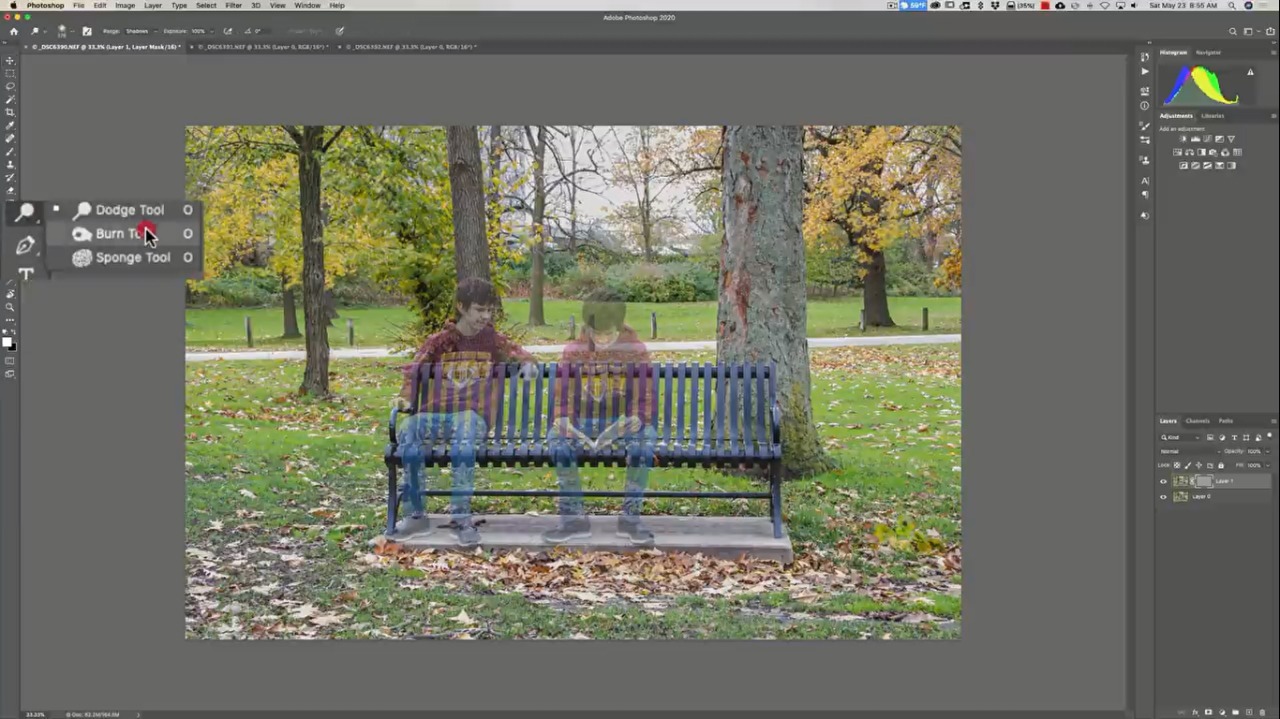 So again, I could just turn that off you can see we’re right back because turning that off turns off not only layer. 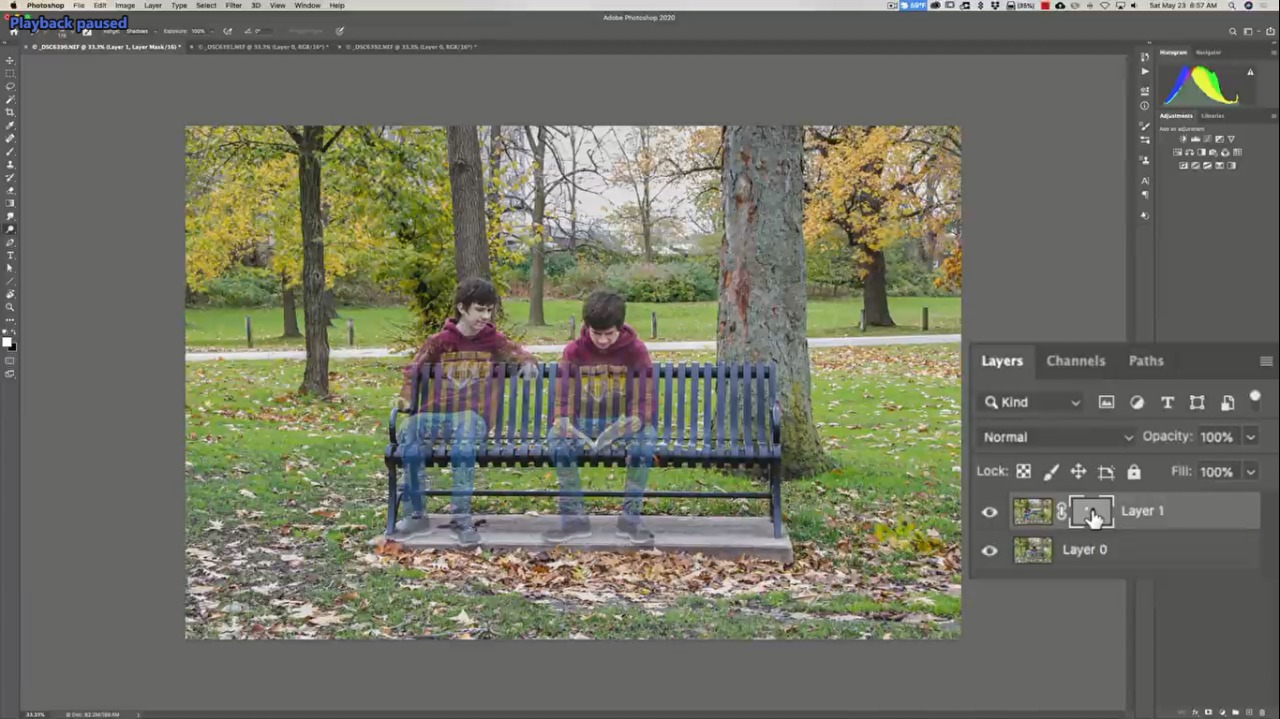 One but it turns off the mask for layer 1. So it’s allowing all of layers here to come through. So those that’s really just the very basics of layers. There’s so much more you could do with it.